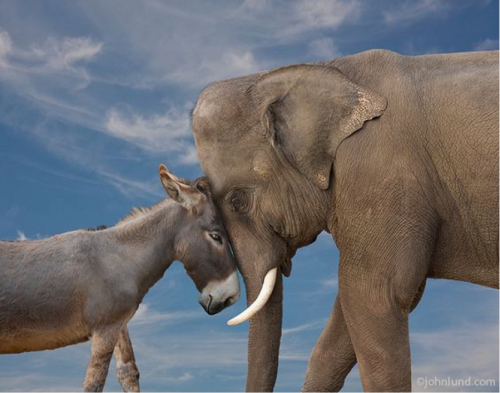 There’s a woman at my gym I like. A lot. We do weight training in small groups and I like bitching with her about how heavy the weights, how awkward the positions or how sore we’ll be the next day. I like gossiping with her about the gym manager’s love affairs. I like laughing with her. We laugh a lot and we laugh at the same things. I like the way she looks. She has intense azure eyes and an off-kilter smile.   She has an abundance of warmth and…let me stop there because I’m describing chemistry and everyone reading this will know what I’m talking about. I’m attracted to her in that ineffable way people are attracted to each other and usually prefer not to analyze because there’s an element of magic to it… but I’ve been forced to think about it because of Donald Trump.

About a year ago, she and I were pedaling side by side on elliptical machines and watching CNN. Trump’s face appeared on the screen and she said:

daddy’s home: how getting a dog can break relationship rules 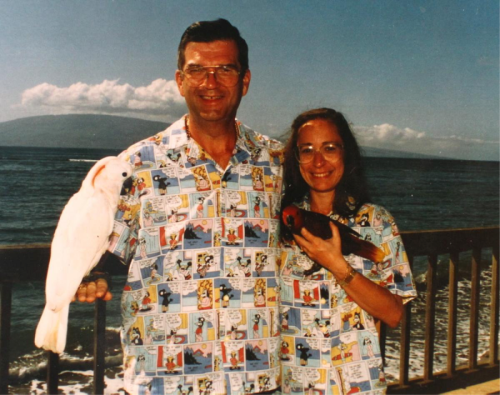 I’d like to blame my husband for this deviant practice but, in truth, I started it. Even so, I think I can still blame him because the practice doesn’t bother him as much as it bothers me. In fact, it may not bother him at all but I’m too busy being bothered by it to focus on whether it bothers him.

While it doesn’t involve sex, it does involve marriage, my marriage. But to start from the beginning: when we were in the early stages of becoming a couple I knew at some point I would have to divulge my two relationship rules. Although the first rule doesn’t have anything to do with the second one, and the second rule is more or less the subject of this post, I’m going to mention both because I hope to establish my credentials as being, if not precisely cool, at least not entirely un-cool in the domestic arena.   Also, I want to mention both rules because, I believe, that having only two demonstrates that I’m hardly tyrannical in the relationship department. (It’s possible that I’ve established a few more since then, but never mind.) END_OF_DOCUMENT_TOKEN_TO_BE_REPLACED 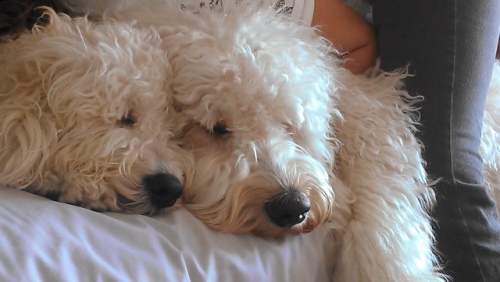 Every week brings news of yet another way dogs help humans. We’ve know for a while they can be excellent detectives –  diagnosing melanoma with their noses, sensing dangerous blood sugar fluctuations in diabetics and discerning imminent seizures in epileptics. People with dogs are generally healthier – after acquiring a pooch they exercise more, their blood pressure goes down, their sense of well being goes up. And the list goes on. But when I read these studies, I often wonder if anyone has measured the negative effects of dog ownership.

What happens to one’s vocal cords when one yells “shut the fuck up ” 50 times a day to a dog who barks at all manner of threats such as the wind in the willows or her own reflection in the window pane at night?  And what about the effect on one’s lower back of bending over to scoop up dog poop twice a day to say nothing of the cumulative stress of worrying about the accumulation of millions of plastic bags filled with said poop? (And why isn’t there a law mandating that those bags be biodegradable?)  And for all the new friends you make because of the dog, how many do you lose because you’ve become a bore who talks too much about dogs and not enough about movies, books, politics – in short, a dog nut who is more likely to express astonishment at the number of breeds being bred with poodles (Did you know there are now poogles, woodles, schnnodles, scoodles, and Saint Berdoodles? And that’s only a fraction of the number of poodle hybrids.) than she is an opinion about whether Hillary should run or on the pros and cons of housing density along the Highway 101 corridor? END_OF_DOCUMENT_TOKEN_TO_BE_REPLACED

what do I have in common with Julia Roberts? how being a dog owner is like being a celebrity 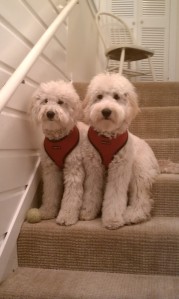 I have never been, nor will I ever be, a celebrity — not even for Andy Warhol’s 15 minutes.  But I maintain that having a dog shares some of the features of celebrityhood and if you walk around with two dogs, you’re on your way to being a super celebrity.

When our dog Alice was a puppy, I was astonished by how many people stopped to ask about her. And it wasn’t only people I encountered on the sidewalk or the hiking trail. People in cars would pull over, roll down their windows and shout out questions. Some actually parked and got out of their cars to ask about her.  Well, I thought, everyone loves a puppy. END_OF_DOCUMENT_TOKEN_TO_BE_REPLACED

i’m not getting a rescue dog, okay?

I’m about to get a puppy and I’m dancing-around-the-kitchen excited about it. All of the necessary components of my life have finally converged to make this possible: I’m not going to do anymore extended projects in Africa or anywhere else abroad, I’m unemployed (plenty of training and bonding time!) and this summer I got a fence in my back yard. I even finally got the three feral cats living underneath the shed fixed and treated for fleas after putting it off for three years. The dog training books are stacked on my bedside table and I’ve warned all my friends that “dog-friendly” will be my new outing criteria. It’s T minus 28 days and I’m rarin’ to go. There’s only one fly in my liver-flavored canine oral cleansing ointment – my growing fixation on coming up with snappy comebacks to the question I anticipate getting daily on the hike and bike trail.  So let me announce it here: I’m NOT getting a rescue dog, and I REFUSE to feel guilty about it.

OK, so I feel a little guilty about it or I wouldn’t have to protest so much. But only a little! And not because of all the dog nuts that will judge me. END_OF_DOCUMENT_TOKEN_TO_BE_REPLACED

it’s true, all men are bastards: when your dog falls in love with a fickle partner 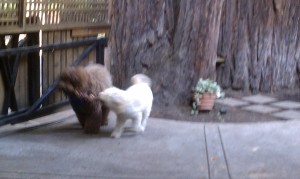 Alice is in love. The object of her affection is Jasper, a hefty Labradoodle who looks more like a bear than a dog. They are both shaggy but otherwise they are a picture of contrasts. She’s a creamy 25 pounder; he’s chocolate and weighs 75 pounds. Every day when we pass Jasper’s house on our walk, if he isn’t home or if I don’t have time to stop, I have a mutiny on my hands. Alice emits a doleful cry and like a stubborn donkey in a cartoon, she puts the brakes on and no amount of cajoling will get her to move. Since I don’t want to drag her little butt along the sidewalk, the only way to keep going is to pick her up and carry her far enough away that she loses his scent. According to Jasper’s owner, Fran, when we have a scheduled play date and she announces it to Jasper, he posts himself at their front window and waits. 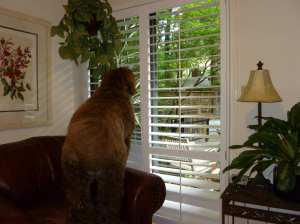 As soon as he sees her, he literally jumps for joy and the two of them fall into each other’s forelegs.

They jump, they run, they twirl. They lick each other, they play tug-of-war, but even with all the rough and tumble, the boy is gentle with her and has been since she was a tiny puppy. It’s like watching Gérard Depardieu make chaste love to little Gidget. END_OF_DOCUMENT_TOKEN_TO_BE_REPLACED 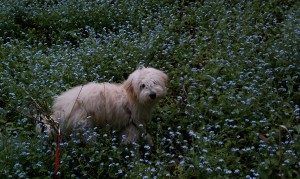 Six months ago, after a no-dog hiatus of more than ten years, my husband and I got a puppy – a half golden retriever, half poodle. (Yes, I’m trying to avoid writing Goldendoodle. Owning any kind of doodle in our location (Southern Marin) and in our demographic (empty nesters) is an ubercliché.) Cliché or no, we are both amazed at how much we adore this little creature. I don’t know if it’s because of her qualities – sweet, funny, easygoing and easy on the eyes – or because the last time around we had children sopping up our parental love but something is different this time around. Every time I look at her she makes me happy and she touches me in such a deep way it almost scares me. I tell you this to demonstrate that my dog-adoring credentials are solid. But….

I recently discovered that I part company with some, perhaps most, of my dog-adoring brothers and sisters when it comes to The Leash. END_OF_DOCUMENT_TOKEN_TO_BE_REPLACED

dominance in the dog house: trying and failing at dog training 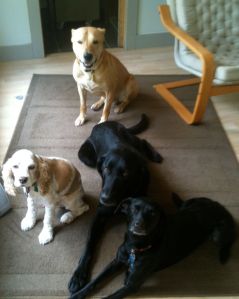 This summer I had my first shot at being a pack leader. My house was rented out for two months so I ended up house sitting for a couple that has four dogs. Four. Other than the prodigious amount of dog hair I’ve become accustomed to, I’ve also gotten an inside look at what kind of territory dogs have taken over in the American psyche.

When I was young, there was no dog whisperer or puppy college. You brought a puppy home, hoped it quickly grew out of the shoe-chewing phase and kicked it when it humped guests’ legs. Nowadays trainers instruct dog “guardians” on everything from who should go through the doorway first (you, not the dog) and whether or not tug-of-war is harmless fun or dangerous precedent (seem to be split down the middle on this one.) Clearly out of my depth in the new canine culture,  I’ve  spent most of the summer at the mercy of these damned dogs. END_OF_DOCUMENT_TOKEN_TO_BE_REPLACED