Ebola is real. Our risk is not. Protect front line health-workers.

As a field epidemiologist, I have responded to disease outbreaks all over Africa during the past 10 years, from cholera to meningitis to Hepatitis E. Any other year, I’d be in Liberia right now, in gumboots with a map and a spreadsheet, trying to track and contain Ebola’s spread alongside my colleagues. Because of a new baby, however, I’m watching from the sidelines.

So far, what I’ve seen from the bench makes me concerned – not about Ebola’s threat to the United States, but about the mixed messages our leaders are sending and the mob mentality that results when fear overtakes facts.

Though my professional career in international health has been primarily with Doctors Without Borders, I am not speaking on behalf of the organization or my colleagues. I don’t know Dr. Craig Spencer personally, though he worked in Guinea with some of my good friends. I’ve never met nurse Kaci Hickox in person (that I know of) but we corresponded about project data a few years ago. I have e-mailed both of these colleagues messages of support in the past few days, but haven’t been in touch – i.e. I have no insider or personal information about either.  The facts I’m writing about here all come from mainstream news coverage.

Based on my experience as an epidemiologist and aid worker, I offer four main areas of improvement for the U.S. to start getting Ebola management right. END_OF_DOCUMENT_TOKEN_TO_BE_REPLACED

this old house: my life in a highly permeable membrane 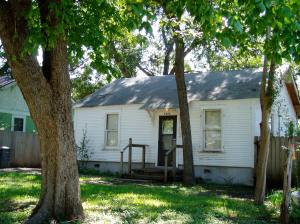 the sad little house on the day I moved in

My house breathes. That’s not the technical term for it, of course – the technical term is that it has “excessive air infiltration.” I had an energy efficiency audit last week that confirmed it. Jim from the energy utility here in Austin hooked up a blower door to my entryway and let it rip. The blower door has a red piece of canvas with a big fan in the center that covers your front doorway. It looks like it would be used to inflate a circus tent but it’s the opposite. It sucks all the air out of your house and then tests the pressure. Well, at least it tries to – my house gave it a good run for its money.

Jim told me the appropriate level of seal for an energy efficient house in this climate would have to be less than 5 air changes per hour, or ACH, for those trying to quantify energy hogs like me. (He also told me that’s measured at 50 pascals of pressure, which I’m passing on to you, dear reader, because it means nothing to me.) The little computer attached to the blower reported that my house had 35 ACH. Was this the worst he’d ever seen? No, but he did later make a casual comparison between my house and a tobacco drying barn, a structure purposely built for open ventilation. END_OF_DOCUMENT_TOKEN_TO_BE_REPLACED 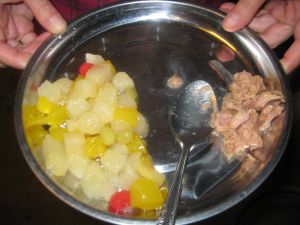 meal of desperation: canned fruit cocktail with a side of canned tuna

Food cravings are a motherfucker. After a few weeks of being in the field with the same slop every day, my gastronomic fantasy life takes on a bigger and bigger portion of my conscious and unconscious mind with debilitating consequences. I’ve been through this cycle enough times now to recognize the signs and symptoms, which I will presently share with you.

(In a future post I’ll talk about REAL food problems in refugee camps that will put my indulgent indignation in proper perspective, but for now I just need to whine.)

But before I get into the Meredith/Kübler-Ross Five Stages of Varied Food Deprivation, however, let me give you a small snapshot of what kind of culinary context I’m referring to. Let’s take my recent time in South Sudan as an example. END_OF_DOCUMENT_TOKEN_TO_BE_REPLACED

refugee camp outbreak: a father, his sick daughter and the tiniest baby

Jamal  is the Blue Nile grampa I never had. He is a slight figure, even in his size 42 gumboots. He wears an Islamic cap and always comes early to work, perching on a chair to my right. While there are many younger men on my team, none compete with Jamal’s vigilance. Most mornings at the outreach worker meeting he pulls me aside at the end to tell me of people he’s concerned about from the village he visited the previous day. One day he told me about a man who was killing many goats in the village of Ayouk, scaring the other refugees. Last week he brought out a tiny scrap of paper with his Arabic-scripted note: there was a sick woman in Soda Amol who hadn’t been able to walk because of swollen legs for two days. He wanted me to go find her because thought she should come to the hospital. He was right – she needed urgent care. END_OF_DOCUMENT_TOKEN_TO_BE_REPLACED 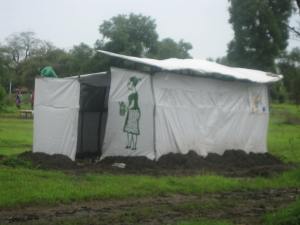 the ladies’ room in a new refugee camp

Easy enough for me to tell my latrine sob story, but let me give an even stronger piece of advice: really, really try to avoid being a refugee in a newly created camp that only has trench latrines. As an aid worker I’m supposed to encourage all refugees to use only the designated camp latrines. Getting, and keeping, human shit away from food and clean water is about as central a public health intervention as you can get.  If you can do nothing else for a bunch of displaced people living in the middle of nowhere, establish a shitting field and make sure the community leaders enforce it. As a human being, and fellow lady to many of them, however, it’s pretty hard to push the trench. END_OF_DOCUMENT_TOKEN_TO_BE_REPLACED

My feet but NOT my pink Crocs!!! Borrowed from a friend!

I have one key piece of advice for female aid workers on their way to Africa: once you get there, get a potty. This might even be more important than my earlier advice about underwear. Displaying your undies  in full view of your boss only happens once a week – the potty issue comes up every night.

Nighttime elimination first became an issue when I worked in Darfur. END_OF_DOCUMENT_TOKEN_TO_BE_REPLACED

beautiful mama with her hungry baby

In my first semester of public health school I took a course on refugee health. One of the nutritional programs my instructor talked about was “blanket feeding.” Every time she said the word “blanket” I imagined a huge Iowa-sized quilt descending on a refugee camp in the night, stretching to cover each tent. This week, more than ten years later, I finally saw one in action.

There are feeding programs for kiddos in many (but not all) of our emergency medical programs. Most of the time they are targeted to malnourished children only; the rest of the kids rely on general food distributions done by the World Food Program (WFP.) Once in a while WFP can also offer blanket feeding, which is like a general distribution but only for kids in a specific age range (usually under five years old.) We don’t usually do them since food distribution is a specialty in and of itself, but we stepped in this time since no one else could do it. END_OF_DOCUMENT_TOKEN_TO_BE_REPLACED 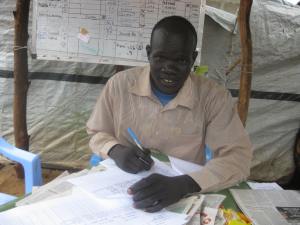 Timoty belongs to the Maban tribe. When he was 15 one of his lower teeth was removed, as is the custom for teenaged boys in that community. He is not part of the love triangle.

Both of my translators were an hour late for my morning meeting with the 40 outreach workers. When Timoty and Anur  arrived – after I’d been desperately (and unsuccessfully) pantomiming a short message about which teams needed to fill out new HR forms for the past 45 minutes – I asked them where they had been. Anur explained that their friend had become sick in the night and they had to bring him to the traditional healer.  Had they gone to the hospital first? No.

This was more than a little defeating for a couple of reasons. The first, of course, was that I had lost an hour of my meeting. The second was that a large part of the training on Saturday was about how to convince the refugees to come use our health services before going to the traditional healers. We were all on board: Sick people should come to the hospital. Yes!

But that was Saturday. END_OF_DOCUMENT_TOKEN_TO_BE_REPLACED 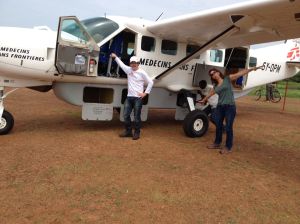 MSF plane that flew us from Juba, landed on Adan air strip 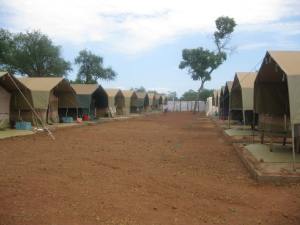 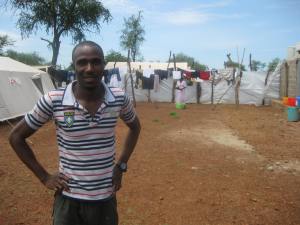 Stefanos, the Nigerian feeding center nurse in the forefront. Prominently displayed compound clothesline in background. Don’t look for my knickers. Haven’t tackled that project yet. 45 people, 2 “shower” cubicles, just to the right of the clotheslines. Make it quick. END_OF_DOCUMENT_TOKEN_TO_BE_REPLACED

underwear on washing line via jospaul.co.uk

I’m at it again. Packing. This time it’s for a one-month stint in South Sudan. The conditions will be tough, I’ve been warned. Shared sleeping tents, limited electricity, knee-deep mud, two latrines for forty people. I’ve already gotten much advice from the hardened colleagues already there: Bring vitamins, Ruby shared, because fruits and vegetables are thin on the ground. A good torch is extra necessary to navigate the snakes and scorpions in the night, Matt advised. And don’t forget the rain gear – have I heard that August is the height of the rainy season?

All of these tips are well-received. Ziploc bags full of my REI headlamp, Pepto Bismol, AA batteries, malaria pills, multivitamins and spare umbrella are piled atop my “go bag.” Unfortunately I’m still hung up on the most basic of provisions. Which underwear am I going to bring? END_OF_DOCUMENT_TOKEN_TO_BE_REPLACED