that brief period where I tried to hold on to my sanity: news blackout in the time of trump

I took a break from life in the mainstream – a six-month break to be exact. After the election, I dug a hole in the sand, firmly planted my head in it and vowed that I wouldn’t pull it out until there was evidence that my husband had won the worst fight we ever had. Let me explain.

On that dreadful morning when the country, at least the civilized portion of it, was trying to comprehend what had just happened, I looked across the breakfast table at my husband and noticed that he didn’t look terrified. “Don’t you dare not be undone by this,” I said. “I don’t want to hear any of your optimistic bullshit. This is a disaster of disastrous proportions…there is no good face to put on it.” He, nonetheless, dared: he said he continued to believe that our checks and balances were, eventually, going to right the ship. I told him he was dead wrong. The Republicans controlled everything. It was over. END_OF_DOCUMENT_TOKEN_TO_BE_REPLACED

daddy’s home: how getting a dog can break relationship rules

I’d like to blame my husband for this deviant practice but, in truth, I started it. Even so, I think I can still blame him because the practice doesn’t bother him as much as it bothers me. In fact, it may not bother him at all but I’m too busy being bothered by it to focus on whether it bothers him.

While it doesn’t involve sex, it does involve marriage, my marriage. But to start from the beginning: when we were in the early stages of becoming a couple I knew at some point I would have to divulge my two relationship rules. Although the first rule doesn’t have anything to do with the second one, and the second rule is more or less the subject of this post, I’m going to mention both because I hope to establish my credentials as being, if not precisely cool, at least not entirely un-cool in the domestic arena.   Also, I want to mention both rules because, I believe, that having only two demonstrates that I’m hardly tyrannical in the relationship department. (It’s possible that I’ve established a few more since then, but never mind.) END_OF_DOCUMENT_TOKEN_TO_BE_REPLACED

can david hockney save my marriage?: one overly opinionated wife and her quieter husband 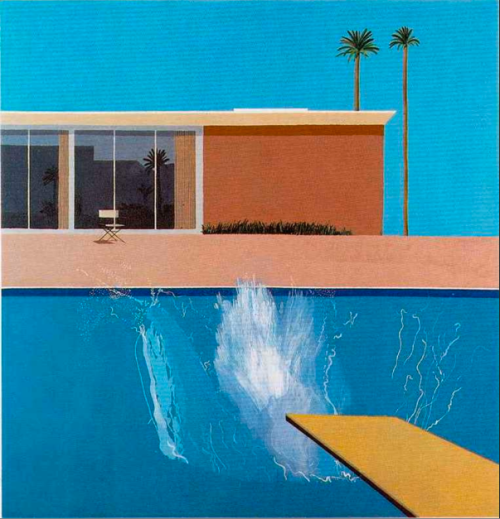 a bigger splash 1967 by david hockney

When I first discovered David Hockney a couple of decades ago, his paintings thrilled me. I found the cobalt cerulean hues of his swimming pools irresistible and his particular rendering of the southern California light evoked a longing in me for my childhood. He once called that light extravagant and said it was one of the lures that drew him to Los Angeles in the first place. It’s a light that owes some of its magic to air pollution and the skies under which I grew up were much smoggier than they are now. Often it was difficult to catch my breath without it hurting but those violet particulates permeated more than my lungs; when I left L.A. my heart missed that lambent glow.

This is not to say I considered Hockney a great artist. His images were so tinged with nostalgia for me, I couldn’t judge.

I recently attended a block-buster Hockney show at the de Young Museum in San Francisco – an exhibit The New York Times called a “sprawling romp.”  It featured room after room of eye-popping color and included portraits of friends and family, still lifes of fruit and flowers and dazzling, giant images of the East Yorkshire landscape where Hockney grew up and returned to a decade ago.   I went to see it with a friend who is an artist. I don’t usually go to art museums with friends who are artists. I don’t have anything against doing that it simply doesn’t come up very often. It came up this time when we discovered over dinner that neither of us had been to the exhibit and it was soon closing. A week later we were standing at the entrance.

“How long do you need?” I asked, looking at my watch. “Should we meet in the café?”

She shook her head. “No, no, let’s stay together.”

One painting in, I realized it was going to be a little more complicated than two friends sharing an art experience. She was to be the teacher. I was to be the student.  I felt a migraine coming on. When I was an official student I did okay with official teachers but I’ve never been too enthusiastic about self-appointed ones.  But, Wait, I said to myself. She’s an artist. A good artist.  This is an opportunity to transcend my usual, I love it,  like it, admire it, hate it routine. Maybe I’ll learn something. And I did. END_OF_DOCUMENT_TOKEN_TO_BE_REPLACED