can we please talk about torture? please?

In mid-December, a few days after Diane Feinstein released the Senate Intelligence Committee report on torture, I was dining out with friends. About an hour into dinner, after we’d talked about grandchildren, books, work, movies, our growing list of age-related maladies, there was a pause in the conversation and I blurted: “Can we talk about torture?”

I knew it was abrupt. I knew it was inconsistent with what’s expected in a congenial dining experience but I was desperate to talk about the report. My husband had been away when it was released and I’d been in a self-imposed period of isolation to get some writing done. The report was upsetting to me, not because of any bombshells but because the graphic detail it contained made the monstrous suffering of those men palpable. (Twenty-six of whom, by the way, were later found to be innocent.) The report also revived my anger at Obama. While it’s true that he ordered torture discontinued when he took office, he’s done nothing to promote accountability for what happened or instituted safeguards to prevent it from ever happening again. (I like and respect Obama and agree with him in many other areas…that’s why his failing in this one is heartbreaking to me.)

The answer to my request at dinner that night, as we picked over our pasta and creamy hummus on seared salmon, was a resounding “no.” No one wanted to talk about torture.

As I drove home from that night I thought about my mother. She was a compassionate woman who was warm and welcoming to nearly everyone but who harbored an almost unshakable hatred for Germans. I say “almost” because she felt sympathy for ordinary Germans who suffered during World War II. But when she encountered Germans who got through the war with their wealth and health in tact, she considered them either directly or indirectly responsible for the slaughter of six million of her tribe. (see Caitlin’s blog post jew-ish: the life and times of a one-sixteenth jew)

So I wondered, what if my friends and I had been having dinner in Munich in 1945? What would we have talked about while Jews were being gassed at Dachau 10 miles away? It’s not perfectly analogous, of course. (For one thing, two of us would likely have been in Dachau.) And, as far as I know other than in combat, the U.S. government hasn’t methodically killed or brutalized anywhere near the same number of people as Hitler. But when I hear Obama proclaim that torture is wrong because “that’s not who we are” I want to shout, “that’s precisely who we are!” According to a recent Washington Post survey, a majority of Americans — 59 percent — think that torturing suspects after the Sept. 11, 2001, attacks was justified because they believe the torture produced valuable intelligence. They are wrong, of course. Even the CIA knew that torture didn’t produce worthwhile intelligence and they knew it before 9/11. In Feinstein’s forward, she states that the CIA had determined from its own experience with coercive interrogations that such techniques “do not produce intelligence” and “will probably result in false answers.” Yet, as she makes clear, these conclusions were ignored.

Even if it worked, I hope I would still be opposed to it — luckily I don’t have that moral quandary because neuroscientists have demonstrated that torture scrambles the brain, making it next to impossible for subjects to retrieve the truth even if they wanted to. “…Torture triggers abnormal patterns of activation in the frontal and temporal lobes, impairing memory,” according to a 2009 summary of research on torture compiled by Newsweek. When a subject is tortured and than asked a question, the question, rather than triggering a simple pattern of brain activation that leads to the stored memory of information, “stimulates memories almost chaotically, without regard to their truthfulness.”

The Feinstein report is only a summary and it was heavily redacted by the CIA (a story in and of itself) but it nonetheless provides a vivid picture of the hell to which these prisoners were subjected: men shackled to the wall, their arms above their heads, forced to stay in that position for days on end; waterboarded; confined in coffins; forced to wear diapers; degrading nudity and sexual humiliation; threats to sodomize mothers, wives, and daughters. These threats along with a technique known as rectal infusion tells us volumes about the mental state of the CIA interrogators. This crew seemed partial to pumping substances up the butts of prisoners. In at least one case, they took a man’s dinner — hummus, pasta with sauce, nuts and raisins – pureed it and then blew it up his rectum with a hose. Medical opinion to the contrary, the CIA claimed (and former CIA head Michael Hayden continues to claim) that these procedures were medically necessary for the hydration needs of the prisoners. It’s quite clear that the only needs being met were the primitive and sadistic needs of the interrogators and their supervisors. Evidence suggests that the anarchic atmosphere surrounding these brutal sessions resulted in the psychosexual regression of the CIA interrogators, landing them squarely in the anal stage, a period of life (18 months to three years) characterized by fixation on the butt and its environs.

And this brings me to an oft-mentioned justification for the behavior of the interrogators — fear.

About a year before 9/11, I was at a dinner party seated next to a psychiatrist — a handsome, tweedy gentleman a couple of decades my senior. I didn’t know him well – over the years we had encountered each other at social events and had conversed amicably, if superficially. That night, however, we somehow started talking about the internment of Japanese-Americans during World War II. He defended it. I attacked it. He dismissed all of my points about the injustice involved with some version of: “Unless you experienced the fear during those years after Pearl Harbor was bombed, you’re in no position to judge Roosevelt for ordering it or the people who supported the decision. Everyone was terrified. No one knew who the enemy was.” I acknowledged that I hadn’t experienced that kind of fear but I still believed that incarcerating more than 100,000 people, the majority of whom were U.S. citizens, without due process and based only on their race was inexcusable.  It got quite heated and people seated around us were growing noticeably more uncomfortable but I was too frustrated to care. I couldn’t believe he wouldn’t concede, at least in retrospect, that it had been a mistake. Finally, I thought of a rejoinder. (Usually I don’t think of rejoinders until I’m home and safely tucked in bed.) “If it was about fear and making people feel safe, why did the government seize so much of their property? That sounds like punishment to me.” I scored a win for my side, but he didn’t give an inch. “I’m sorry, dear. You will never understand. You weren’t there.” 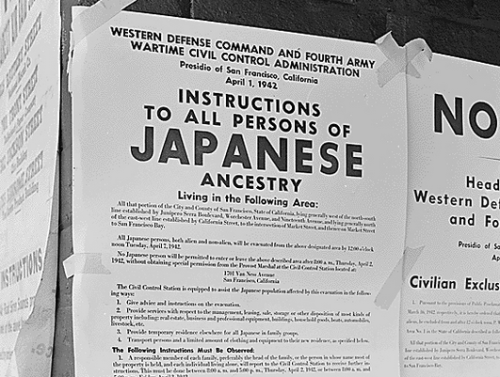 Our president, a former constitutional law professor, is also partial to the fear explanation for illegal behavior. At a press conference last August, he said people shouldn’t be too sanctimonious about torture: “It’s important when we look back to recall how afraid people were.”

This sentiment was repeated over and over again in the week after Feinstein’s report was released. Republicans and the CIA apologists claimed that critics of torture are forgetting how much fear there was after 9/11. I’m not forgetting the fear. The fear is the point. When we’re afraid is when we need oversight and adherence to the law more than ever. Every time ISIS beheads an innocent journalist or a terrorist takes out a dozen people at a magazine, it stimulates our most primitive instincts. The behavior of those CIA interrogators may have been brutal but it was human – all too human. And it will happen again and again and again until we have a way of holding those who torture accountable. And, as citizens, we need to do our part.

In his book, “Nazi Terror: The Gestapo, Jews, and Ordinary Germans,” Eric Johnson focuses on the role ordinary Germans played in the Holocaust. He may be more methodical in his approach than my mother but his conclusions are not all that different. He claims that the Germans who were aware of what was going on were in great enough numbers to have made a difference but they looked the other way. In a review of the book in The New York Times, Barry Gewen writes that ordinary Germans abetted one of the greatest crimes of the 20th century, “not through active collaboration but through passivity, denial and indifference.”

Those of us who know that torture under any circumstances is morally indefensible have a responsibility to talk about torture. Maybe not at dinner out with our friends but somewhere else. We need to keep talking about torture until accountability is established and safeguards instituted. I expect nothing from the Dick Cheneys of the world. It’s the rest of us I’m counting on.

Coming up: Suggestions for what to do about torture

3 Comments to “can we please talk about torture? please?”