Timoty belongs to the Maban tribe. When he was 15 one of his lower teeth was removed, as is the custom for teenaged boys in that community. He is not part of the love triangle.

Both of my translators were an hour late for my morning meeting with the 40 outreach workers. When Timoty and Anur  arrived – after I’d been desperately (and unsuccessfully) pantomiming a short message about which teams needed to fill out new HR forms for the past 45 minutes – I asked them where they had been. Anur explained that their friend had become sick in the night and they had to bring him to the traditional healer.  Had they gone to the hospital first? No.

This was more than a little defeating for a couple of reasons. The first, of course, was that I had lost an hour of my meeting. The second was that a large part of the training on Saturday was about how to convince the refugees to come use our health services before going to the traditional healers. We were all on board: Sick people should come to the hospital. Yes!

But that was Saturday. Now it’s Monday and that training slide has already been tossed aside. One knows that culture change takes a long time, but one still hopes that the employees of a medical organization might, perchance, advocate its use.  As usual, there was more to the story.

When I sat with Anur and Timoty after the meeting they explained that I shouldn’t worry. Their brother (a friend from their village who shares a tent with them) had become paralyzed in the middle of the night.

Them: Yes, only one half of his body was functional.

Me: So did you take him to the hospital?

Them: No, no. This was not a case for your treatment. This was for traditional healer only.

Me: Um. Okay. So, what did the traditional healer do?

They explained the many remedies the healer applied like wrapping the man in blankets and burning special tree roots for him to inhale. When they took their friend home they gave him other special roots to chew on. I asked if their friend was cured and they said not yet, but he was better. When I asked what the diagnosis had been, Timoty said, “love problems.”

So they were right. We have no “heartbreak” box to check on our diagnostic forms.  And now I have to decide whether or not to dock an hours’ pay from them for being late after staying up all night for their lovesick friend. The war between the head and the heart, forever. 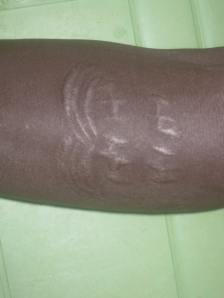 the Maban also do scarring as a rite of passage. here are Timoty’s arm scars. he was very pleased to show them off.