beautiful mama with her hungry baby

In my first semester of public health school I took a course on refugee health. One of the nutritional programs my instructor talked about was “blanket feeding.” Every time she said the word “blanket” I imagined a huge Iowa-sized quilt descending on a refugee camp in the night, stretching to cover each tent. This week, more than ten years later, I finally saw one in action.

There are feeding programs for kiddos in many (but not all) of our emergency medical programs. Most of the time they are targeted to malnourished children only; the rest of the kids rely on general food distributions done by the World Food Program (WFP.) Once in a while WFP can also offer blanket feeding, which is like a general distribution but only for kids in a specific age range (usually under five years old.) We don’t usually do them since food distribution is a specialty in and of itself, but we stepped in this time since no one else could do it. So, starting this past Wednesday we put on a huge freaking party. Over 7,000 kids attended over four days. All of the under-three year olds got four pots of a high calorie nutritional supplement called Plumpy Doz. My guage might be a little off since I’ve (literally) only eaten rice and lentils for the past week, but Plumpy Doz is delicious. It tastes like peanut butter made with half cocoa butter. 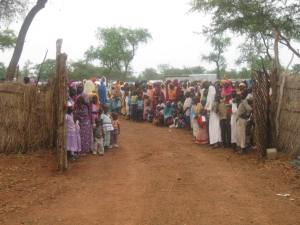 here’s what that line looks like from the inside. we had a little bit of a chaotic opening…. 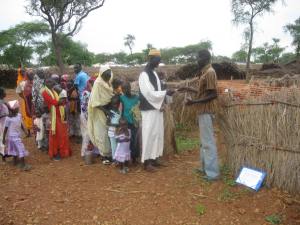 i set up a token system to keep people in order as they arrived to avoid any line fighting. it lasted for about 48 minutes.

here’s my outreach worker Mohammed Issa measuring a child’s upper arm circumference, called a MUAC. this is a quick and dirty way to tell if and how much a child is malnourished. we used the blanket feeding as an opportunity to screen all the kids in the camp.

in order to make sure no kids get screened twice (or come back for a second ration of plumpy doz) we dip their pinkies in this purple stuff called gentian violet that’s used to protect wounds that also stains their skin for a week. after they dip their pinkie we smear it on their left earlobe. this way on day 2 and after we can check all the kiddos for purple ears to make sure they’re not repeat customers

since so few mamas know their babies’ ages we have a height stick to determine eligibility. kids must be between 65 and 110 cm to qualify for the food distribution. it’s so hard when a little one is a couple centimeters too tall…when you’re holding the stick you tend to find ways to push those ones under the line. 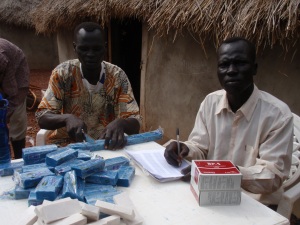 two of the most important players in the distribution: the soap cutter (Abdin) and the tally-taker (Daniel) 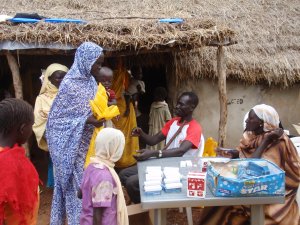 the distribution table – the end of the gauntlet

for all the kids who were either too big or too small for the Plumpy Doz distritbution we gave them a BP-5 (high calorie biscuit bar full of vitamins) and a bar of soap. you can see my outreach worker Benjamin measuring a too big boy here.

we ran out of boxes after three hours. the truck came just in time with more boxes.

some mamas and their kiddos leaving the distribution